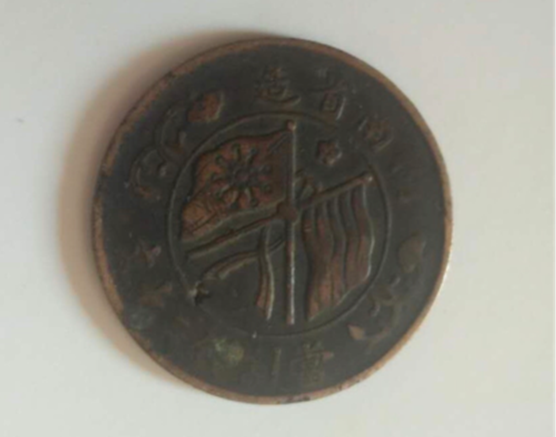 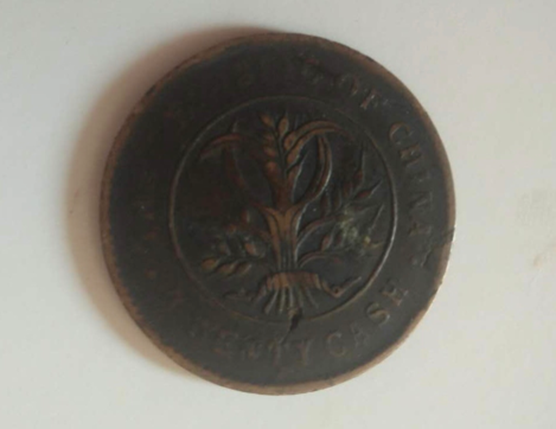 This "double-flag coin made in Hunan Province makes twenty coins" is a copper coin in the Republic of China, and its coin surface design is unique. In the front circle of the coin, there are crossed five-color flags and iron and blood eighteen-star flags, with the words "Made in Hunan Province" on the outer circle and the currency value of the coin "When making money" on the lower ring.

The English words "TWENTY CASH" and "THE REPUBLIG OF CHINA" are on the back of the coin, and the golden harvest rice spike pattern is cast on the inner ring, meaning "family harmony", meaning that the country pays attention to agriculture, mulberry and people's life, and the picture shape is extremely harmonious. The overall color of this coin is ancient and heavy, and its fonts and brushwork are fluent, with exquisite ornamentation and carving, clear and regular arrangement of side teeth and moderate depth. Looking closely at the coin surface, the degree of aging and wear is natural, the ancient charm of copper is ripe, the patina is mellow, the punching pressure of the decorative pattern at the mouth is moderate, and the appearance is intact. Although it has experienced vicissitudes, the grain is still faintly visible. Double flag currency not only has the significance of commemorating the founding of the Republic of China, but also is used as currency in circulation. This copper coin has a very high collection and investment value, because it has witnessed the deposition of its historical era. It is not difficult to see its obvious historical transitional characteristics. This copper coin has experienced many vicissitudes and has an indescribable collection and investment value.

The double-flag coins issued in the Republic of China, as the prestigious products of Chinese copper coins, are the reflection of the political, economic, cultural and artistic conditions in the Republic of China, so its value has been discovered by more and more people and collected by more and more people, and the high-priced double-flag coins have developed dramatically in auctions. It is understood that the overall market trend of the double flag currency is on the rise, and the prospect is extremely impressive and clear.